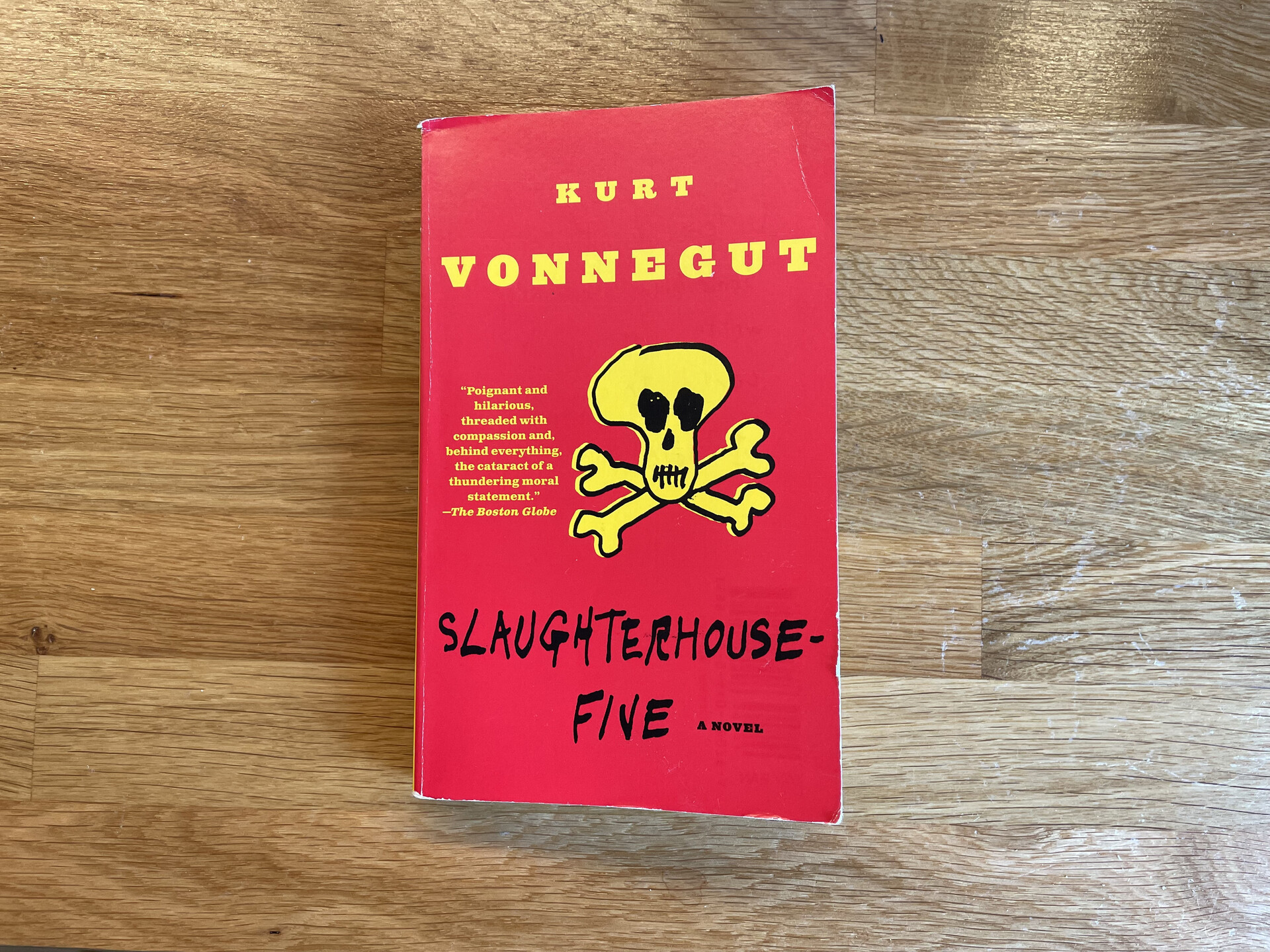 I've read this before, a long time ago, and reading it again reminds me that I'm a sucker for good ol' fashioned post-modern meta-narratives. The conceit of Kurt Vonnegut being Billy Pilgrim, but also being a writer who lived through similar experiences, but also being a character in a book who runs into Billy a couple of times across the story; the repetition of images, phrases, and motifs, refracted and repurposed across a spacetime that exists all at once; all these layers of meaning and abstraction—dazzle me like light in a prism.

Although I could do without the "So it goes" stuff every time someone dies. I know it's a trope, it's a signature.

The Tralfamadorians have a book made up of vignettes that the Tralfamadorian reader is supposed to experience all at the same time, and that's how this book is structured: an echo of Billy Pilgrim's unstuckness-in-time, experiencing it all at once, free will be damned. That's alright: I can live in the world according to Vonnegut. (Although I guess I don't have a choice.)

What to say about its approach to war? It probably made a little bit more sense when the book was published, when war was something that a couple of nations got together and did for a little while, and then stopped when one of them felt like they couldn't go on anymore. War nowadays is a lever applied for the purposes of getting the powerful what they want, for the purposes of sowing discontent among the ranks of wealthy countries, and for the low, low cost of dead minorities somewhere far away. Being anti-war stopped being relevant in the Bush era; everyone bopping around nowadays is, like the characters in Slaughterhouse-Five, so exhausted and desensitised that we can't yield the energy to be generically "anti-war." Instead we're anti-Putin, or anti-Biden, or anti-firearm, or anti-anti-firearm. So it goes!

There's a part in it where a Nazi propagandist discourses on how America treats wealth as virtue and poverty as a deep and personal failure, even though wealth accumulates in the very uppermost strata of American society, and I'm not sure if it's meant to be ironic or not, but it feels true today.

There's another part where the writer asserts that by 1976, the USA will have Balkanised itself into 20 fractured states and that Chicago will have been nuked by the Chinese, but that crowds will collect in stadiums to hear talks on flying saucers. Shortly after this, a character is assassinated with a laser gun. I think that 7 years from the publication of Slaughterhouse-Five is a very short timescale for all of that to happen, but that Vonnegut wasn't exactly wrong in this characterisation of America.

It's a good book, it's a classic, what do you want? If you haven't read it yet, you owe it to yourself to read it—if only so you can have an opinion on it. It's not a hard read, and it is as funny as people say. Go read it.

The Plot Against America

Klara and the Sun