Whenever I spool up a new Express application, I tend to forget the steps I take. I'm writing them down here for my benefit, but the hope is that you will come across this in the future sometime and it'll benefit you too.

This is just part 1 of the series; part 2, in which we will connect the application to a MongoDB database, will come shortly.

As much as it would be nice, it's non-standard to have a single enormous app.js and package.json and let that be the end of it. You'll never collaborate with anyone with that attitude. There needs to be some structure.

Luckily, Express comes with a tool just for that: the express-generator package. It creates a very basic framework of files to save you the half-hour or so of configuration needed to get everything in the right place, and it encourages modularization within a standard. You'll find more information about it here.

express-generator gets installed globally (so you can use it anywhere) and then run with an express command. You can specify options for customizing the HTML and CSS engines you want to use, which is handy.

Make sure to include that —view=pug part, or else you’ll wind up with the jade templating engine, which is exactly the same as pug, except for that Node will hammer you with warnings that jade has been renamed to pug. Go figure.

Another short side note about your fundamental structure here: app.js is where the app's configuration goes; package.json is, well package.json; public is where you assets (stylesheets, images, javascripts) go; routes contains your routing (and the functions that get run on those routes); and views, predictably, contains the pug templates that get rendered by the functions within your routes. bin is where the www file sits, but I don't like it and I'm going to change that in the next paragraph.

This is a purely personal choice, but I don't like having my app's configuration at the top level in app.js while the logic that actually starts the app's server sits in some other folder. So I prefer to grab everything in /bin/www and put it into a start.js file that sits at the top level.

Of course that means that you have to go into your package.json and change the start script. Don't bother with the standard node command; if you haven't already, go npm install -g nodemon, which does the same as node except for it accepts hot reloading, so you don't have to stop and restart your server every time to make a change to your files.

Then go into your package.json and fix that "start" script:

And just like that, you're all set. Time to get the server started up.

Whoo boy look at you go. 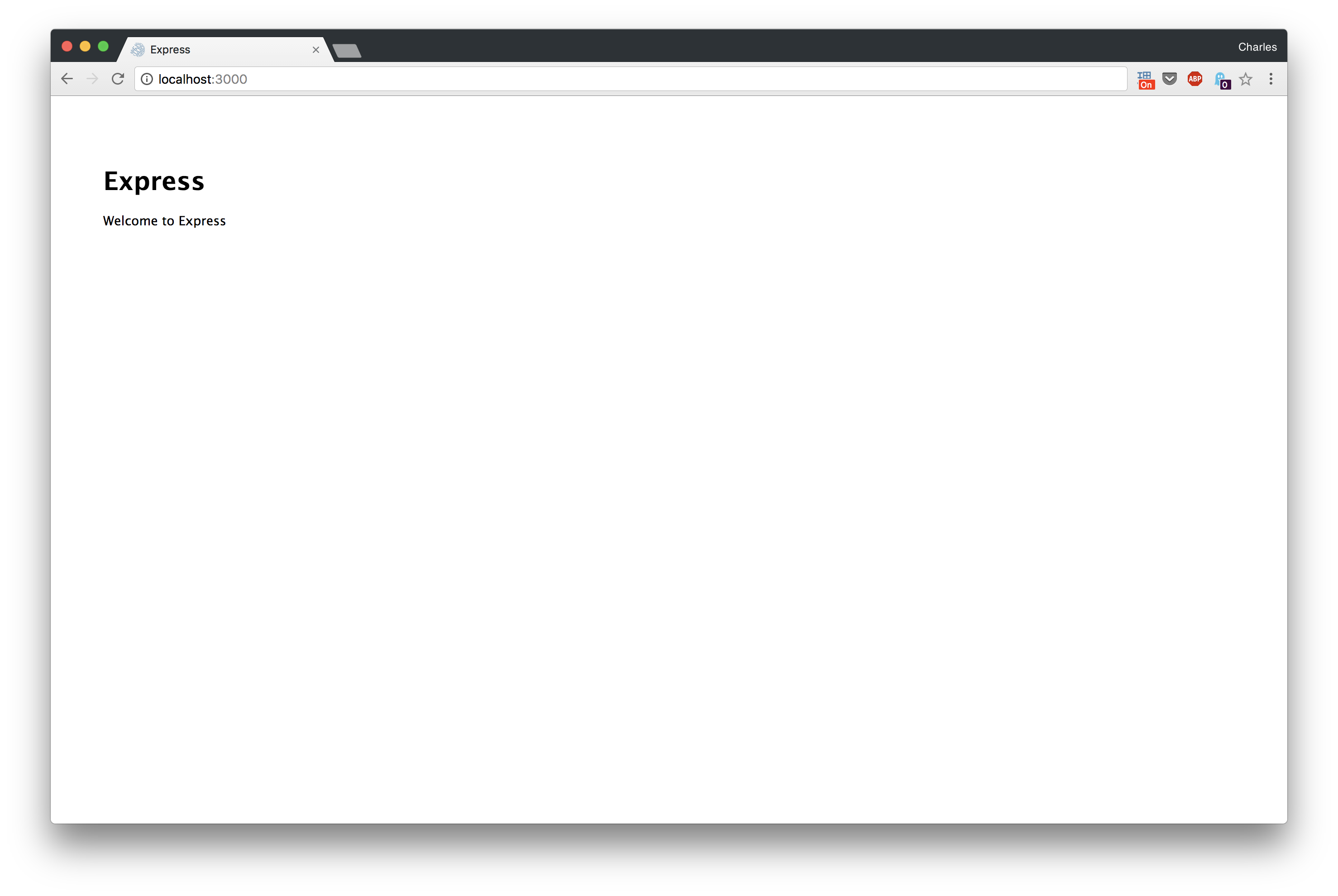 A couple of explanations of things I didn’t know

You might notice once I navigated to ‘localhost:3000’ that you'll also see a list of requests being console.loged, along with some metadata.

Check out this extra-snazzy terminal, courtesy of Hyper

These come from the morgan logger package in your app.js file. Specifically the app.use(logger(‘dev’)); line. Morgan comes with a few predefined formats which determine what gets outputted on request, or you can fiddle with the options yourself. I haven’t dug too deep into the docs, but like I said (wrote?), this more as a reference for myself. So heads up, that’s what that is.

Another thing you'll notice in the app.js file is copious use of the app.use() function. This basically sets up some middleware for whatever route is specified in the first argument (defaulted to ’/‘, which means every route). The second argument is the callback that gets run. Simple enough.

That's about all there is to setting up an Express application. Of course, unless you're planning on writing a basic static site, you're probably going to want to get set up with a database... which I will get into in the next segment of this tutorial.